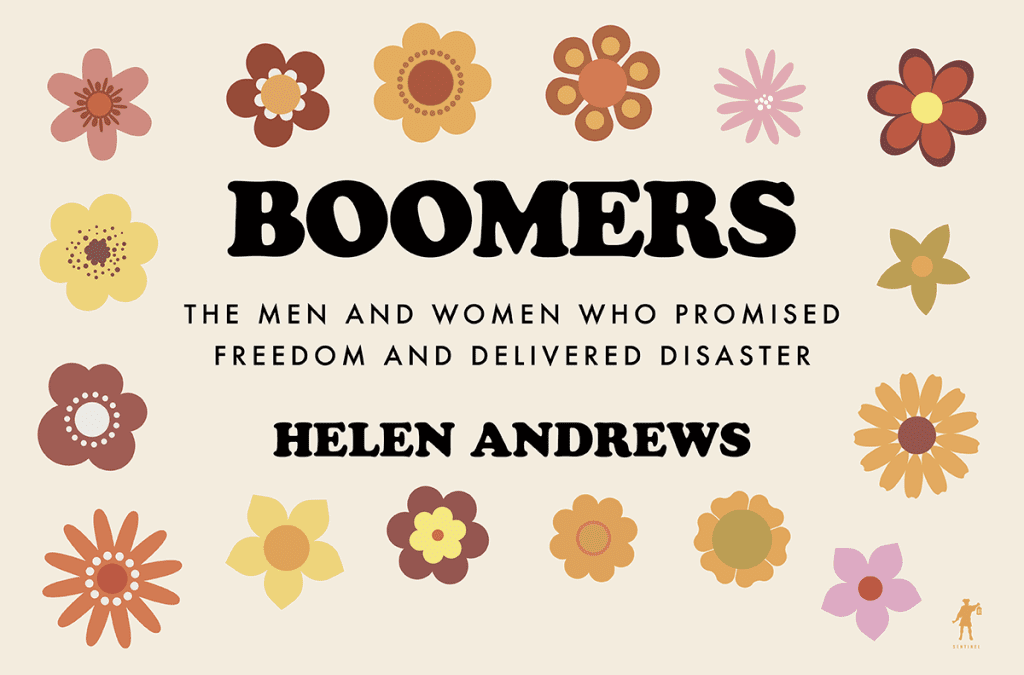 Boomers: The Men and Women Who Promised Freedom and Delivered Disaster

Boomers, by Helen Andrews, is a book about the promises made and unkept by America’s most influential generation. It is also a book that makes a promise; one which, ironically, it fails to keep.

Helen Andrews is impressive. She writes with skill and her career reads like a young writer’s dream. Andrews is a Yale graduate. She has a multitude of pieces in publications like First Things, the Wall Street Journal, and the New York Times. She was an associate editor at National Review, worked as a researcher at an international think tank, was managing editor at the Washington Examiner magazine, was a Robert Novak Journalist Fellow, and is currently senior editor at The American Conservative.

It is no surprise that Boomers is extremely well written. Tight, witty, and insightful, Andrews’ prose is a pleasure to read.

And yet, I found this book disappointing.

From the preface, “Eminent Victorians is a great book and, what is far more rare, a successful book. It hit what it aimed at.”

Lytton Strachey brought down an era with a book and Helen Andrews sets out to do the same. It was Eminent Victorians that inspired her and provided the model for Boomers. And it was Strachey’s accomplishment that she hoped to replicate: to put an end to Boomer supremacy. Andrews pauses, from what seems like hubris, to demure that maybe she isn’t as mean as the task might require.

Faithful to pattern, she chooses a handful of Boomer heroes to biograph:

Hubris aside, I was in. I loved Andrews’ opening tone, her wit, and style. I was rooting for her. Each biography is a pleasure to read. Her writing is focused, interesting, and thoughtful throughout. I wanted her to succeed in her attempt to dissect the Boomer Generation and reveal the truly negative impact these men and women have had on our society.

Helen Andrews
Author of “Boomers: The Men and Women Who Promised Freedom and Delivered Disaster”

Two-thirds into the first biography (Steve Jobs), I began to wonder when the indictments would be served. When will the Boomers get their comeuppance?

There were hints with Andrews’ treatment of Jeffrey Sachs, but alas no Day of Judgement. Sachs seemed to escape with a tisk tisk for late-career hypocrisy and a refusal to own up to his failed programs. Sorkin, Paglia, and Sharpton all received even-handed treatments which served to make them sympathetic characters in her unintended parade of pathos.

Andrews didn’t let loose until she got to her last subject, Sonia Sotomayor. She had no problem portraying the justice unflatteringly, something she struggled to do with her other biographies. Sotomayor was crude, unable to read a room, a bully, and self absorbed.

Even so, by the end of the book, the Boomers seemed to be just fine. No mortal blow, no coup de grâce required. The hegemon still stands.

I continually asked myself throughout the book, “What is Andrews trying to say?” I finished only with the sense that she’d rather the Boomers get out of the way and let her generation, the Millennials, have their turn at the helm.

The Boomer generation promised freedom and delivered disaster. Boomers promised a mortal blow to their grip on society. Alas, it has delivered a mild rebuke and a passive plea to step aside. Boomers misses the mark.